The Advantage of Agile 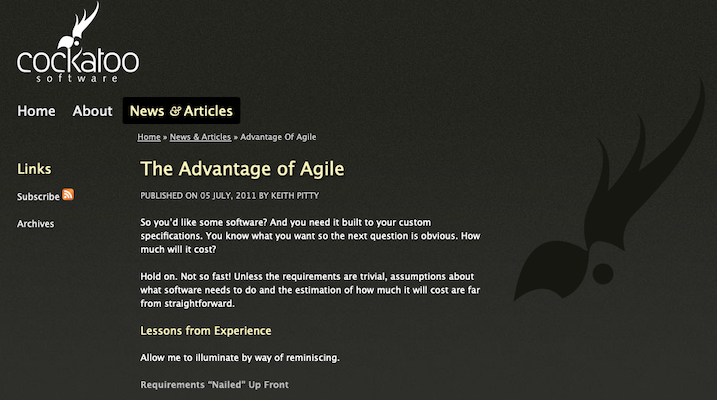 It’s been a few years since my company has traded so I’ve finally decided to shut it down. Before putting its website to rest, I’ve noticed that one old blog post has, in my opinion, stood the test of time.

More than ten years since I posted that article, I consider it still relevant. So, dear reader, read on to find out what I wrote back in 2011, with minor modifications to reflect the fact that it is now 2022!

So you’d like some software? And you need it built to your custom specifications. You know what you want so the next question is obvious. How much will it cost?

Hold on. Not so fast! Unless the requirements are trivial, assumptions about what software needs to do and the estimation of how much it will cost are far from straightforward.

Allow me to illuminate by way of reminiscing.

In the 1980s and 1990s, I had the privilege to work on many projects that followed a traditional “waterfall” process. I say privilege, because there is nothing like learning from experience. The more projects I worked on that followed this approach, the more it became clear to me how flawed such an approach was.

One such project in the 1990s for a major Australian financial institution involved the collaboration of several external companies in addition to coordination amongst staff responsible for nearly ten internal systems.

When I joined the project, it was already in catch-up mode. As a contract programmer I was not privy to the cost estimates and negotiations. However, I was well positioned to observe as the product was guided, eventually, into production. On the plus side, the development processes, especially with respect to testing, were very thorough. However, the whole project was conducted using a “waterfall” methodology. In other words, it was assumed that there would be one development cycle that progressed from requirements-gathering through analysis, design and construction, eventually to deployment.

As it turned out, once we started testing the application as a whole, there was a period lasting many months during which assumed requirements were tested, challenged and in many cases modified. Added to that, because the original estimate was being exceeded, there was pressure to skimp during the testing phases.

The reality was that, at a detailed level, it had not been possible to “nail” the requirements up front.

Several years ago I worked on a web application project that became known as “the Scottish project”, a Shakespearian reference that gives an inkling to the problems that beset it. Despite our best intentions to use Agile practices to the mutual benefit of the customer and our employer, a simple twofold problem jeopardised the project from the outset.

Firstly, try as we did, we could not get anywhere near sufficient involvement from the nominated customer representative. Secondly, he had never previously been involved in a software development project of any complexity. Little wonder we had difficulty in managing the requirements and acceptance of the application, let alone the expectations of the client.

It is instructive to reflect on the causes of failure for this project. We had used Agile practices, which included planning and delivering in an iterative fashion as well as test-driven development and pair programming. However, we failed to gain engagement from the client. Perhaps we should have educated the client more thoroughly about how crucial his role was in the project. Internally we followed the “refactor mercilessly” edict but did we explain well enough how this would benefit the customer? On the other hand it is possible he was never going to listen until it was too late.

The traditional “waterfall” approach to software development, which dates from more than fifty years ago 1, includes the following characteristics:

What’s wrong with this approach?

Fundamentally, the answer is that such an approach is unrealistic.

There is something unique about software. It’s not similar to building bridges or computer hardware. It’s more abstract. Inevitably, more is learned once software is delivered, even in immature form, and used. Unforeseen consequences of requirements or design decisions often only become evident during testing and production use.

Rather than pretending that a software development project can neatly fit into a “waterfall” model, an Agile approach acknowledges that software is complex. It embraces the likelihood of changes in requirements and understanding. It recognises that building software is a journey of knowledge discovery.

Agile planning splits the project up into several iterations. The length of iteration is arbitrary but two-week iterations are not uncommon. Ideally, each iteration involves a delivery, even if not into a production environment.

Assuming that features have been prioritised so that the most valuable are delivered first, it should be possible to choose a subset of features that can form an early production deployment, or at least be production-ready.

The adoption of an Agile approach to software development planning is now well supported by software tools. Pivotal Tracker 2 is, in my view, an excellent example.

Central to Agile is the acceptance that, as software is used, new possibilities for improvement will be envisaged. Some of these will attract an agreed high priority due to their perceived advantage to the business. This is part and parcel of an iterative approach to software development which accepts that collective learning takes place as software is used. 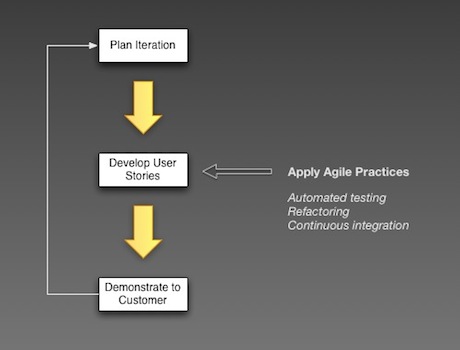 Coupled with this iterative approach to planning, Agile practices such as automated testing, refactoring and continuous integration are applied as the user stories for each iteration are developed.

Given that we have more than fifty years of “waterfall baggage” to overcome, software developers need to explain the benefits of Agile to customers. These include:

A successful software development project will involve some give and take, mutual recognition of software complexity and the need to collaborate. Continuous communication between the developer and the client is crucial. A lack of commitment to this dialogue, as alluded to earlier in this article, is likely to lead to project failure.

It is worth reflecting on the Manifesto for Agile Software Development which was published 21 years ago. The originators emphasised that through uncovering better ways of developing software they came to value:

Inherent in these values is the recognition that software development projects involve a wide range of groups of individuals. People differ and the dynamics of groups of people differ. As such, whilst adhering to core Agile practices is valuable, it is also important for each group to be flexible enough to adapt Agile practices to their situation.

1 “What software people must do is to adopt the same engineering practices that are successfully deployed by us hardware engineers” Bell Labs 1968, quoted by Rob Thomsett in Is Business Ready For Agile?, Agile Australia 2011.

2 The reference to Pivotal Tracker is certainly dated. For some years now my favoured planning tool has been Trello.