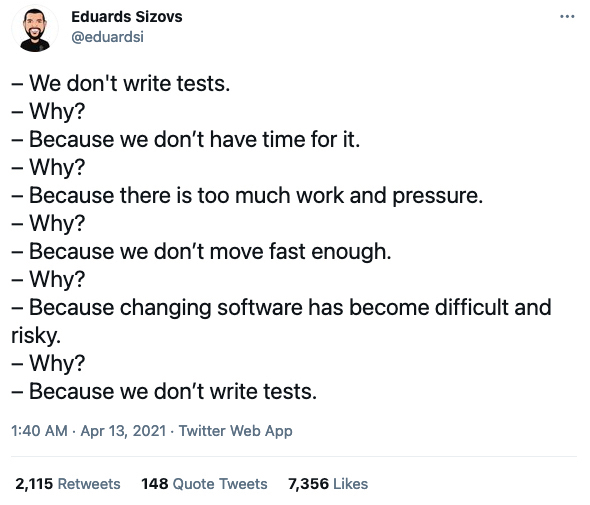 It has obviously struck a chord with many others because it highlights a truism in software development. So many applications become burdened with being cumbersome to maintain because insufficient priority has been given to enabling them to be tested within a practical time-frame.

More on this theme

This is a theme that was also highlighted recently in an article in the Australian Computer Society’s Information Age entitled Software testing is slowing transformation. This article cited a report by Tricentis that found that the average time software testers spent manually checking “the functioning of every element to ensure that the quality and reliability of the whole solution have been maintained” is now taking an average of 23 days.

Obviously the reliance on manual quality assurance testing does not enable quick development and deployment of changes to applications.

Unsurprisingly, the Information Age article goes on to emphasise the importance of automated testing.

“Automated software testing has emerged as a key tool to make this happen, with increasingly intelligent, AI-driven tools able to source human-written source code for changes, dependencies, and even potential security issues.

Few companies are achieving the greater than 75 per cent automation rate that signifies mature software development processes, the report notes, while most lack supporting testing technology like service virtualisation and test data management."

Once an application has first been deployed to production, if it is to stand a chance of being successful into the future, careful consideration needs to be given to how to enable it to be maintained in a sustainable fashion.

When do we need to consider application longevity?

Before it is too late!

If we observe what Ward Cunningham’s original wiki had to say about Technical Debt, one of the key statements was:

“Don’t let the debt build up. Everyone knows the list will never be addressed. Remove cruft as you go. Build simplicity and clarity in from the beginning, and never relent in keeping them in.”

So, as a development team, in conjunction with the business, we need to deliberately focus on enabling application longevity from early in the piece. The longer we leave it, the harder it will be to recover the technical debt.

Too often, this lesson is ignored.

What will enable an application to last and thrive?

As the earlier tweet and ACS article emphasised, an absence of automated testing inevitably leads to a dependence on lengthy, manual testing. Given the fact that automated testing and continuous integration have been long-standing practices, there is no excuse for bypassing them.

The alternative is, whichever way you consider it, a significant impediment.

In one scenario, the team is faced with time-consuming, error-prone manual testing whenever a change is to be considered for deployment. Or, worse still, changes that would otherwise improve the internal design of the application or improve its business function, are not delivered at all due to a lack of confidence that the application will not break.

There will be circumstances when years pass and the application has not been given the benefit of automated tests. If this is the case, it may not be too late. A decision can still be made to start building automated tests and a CI infrastructure. However, this is likely to require significant persuasion that the investment is worth it.

A commitment to refactoring

Before I go any further, let me be clear. Refactoring implies automated testing. Too often I have heard developers talk about their intention to “refactor” a part of a codebase when there are no automated tests. As Martin Fowler put it in the subtitle of his Refactoring book back in 2000, it is Improving the Design of Existing Code.

Automated tests are required to ensure that the behaviour of the existing code remains the same as the internal design is improved.

Having made that point, it is important to recognise that a codebase is liable to decay over time. Quick fixes can be applied without concern for long-term maintainability. Developers new to a codebase can solve problems without adhering to patterns already established in the codebase. Many other factors can lead to code that is not easy to maintain.

So, especially when a part of the codebase is being changed to add a business feature, care should be taken to refactor, to improve the design of existing code.

A commitment to updating dependencies

When an application is first launched, it is likely to depend upon recent versions of the operating system, database management system, web server, web framework, programming language and various open source libraries. It is also likely that, at this time, very little attention is paid to the fact that the versions of these dependent software systems and libraries are recent.

Shortly after the time when an application is first launched, how much attention is paid to a maintenance plan? Probably not much. The business is likely to be more focused on how well the application will achieve its objectives. This is reasonable.

However, at some point, as it hopefully becomes clear that the application is achieving sufficient success to remain deployed for the foreseeable future, attention must be paid to updating dependencies. Tools such as Dependabot smooth the way.

Failure to embark upon a program of regularly implementing updates will lead to a poor set of outcomes. As far as ease of maintenance is concerned, allowing versions of dependent software to get out of date is likely to result in much time lost in frustrating developer experience, whether it is due to difficulty in installing unsupported versions or a mismatch in online documentation and old versions that the application still depends upon.

The lack of security patches, which are regularly included on new versions of software, can also result in risks to business operations.

Relating these comments back to the tweet reference that started this post, a healthy set of automated tests will make it much easier to confidently apply updates of dependent software. A lack of automated tests and CI will likely lead to dependence on unsupported software. As a related aside, it is interesting to read the first two paragraphs of Upgrading Ruby on Rails on the Rails Guides site:

“Before attempting to upgrade an existing application, you should be sure you have a good reason to upgrade. You need to balance several factors: the need for new features, the increasing difficulty of finding support for old code, and your available time and skills, to name a few.

The best way to be sure that your application still works after upgrading is to have good test coverage before you start the process. If you don’t have automated tests that exercise the bulk of your application, you’ll need to spend time manually exercising all the parts that have changed. In the case of a Rails upgrade, that will mean every single piece of functionality in the application. Do yourself a favor and make sure your test coverage is good before you start an upgrade."

A successful application launch is something to be celebrated. An application successfully operating after a significant period of time is even better. However, careful planning and management are necessary to ensure that applications truly stand the test of time.

Automated tests and continuous integration play a crucial role in allowing development teams to confidently maintain applications that will continue to adapt to changing business requirements.