A few weeks ago, James Healy, my colleague at The Conversation, alerted the team to the following tweet from Kent Beck. 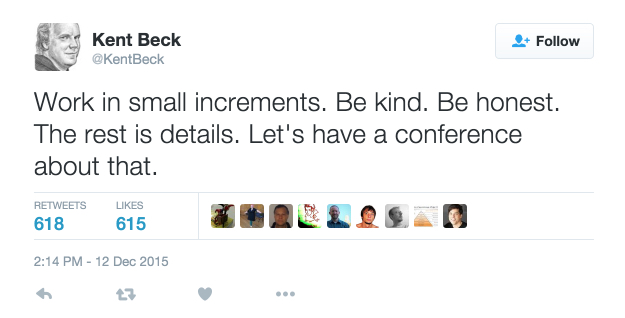 Fast forward to the present and I find myself reflecting on Ruby Conf AU, held on the Gold Coast recently.

My gut feeling is that the conference would score fairly well if evaluated against Kent’s criteria. But us programmers are analytic beings, so let me reflect on the talks and see how well they stack up.

Whilst there were many excellent talks amongst the 24 that were included, I’m going to pick some of them that resonated with me and place them each in one of Kent’s categories.

Gradual refactoring, as illustrated by Katrina Owen in her One Undo talk, is a vital aspect of working in small increments. Katrina showed us an example of how to initially place some poorly optimised code under test and then progressively improve it by teasing out the abstractions. To me, it was a brilliant example of how to “remove duplication and improve names in small cycles”, as Joe Rainsberger would say.

To work in small increments, refactoring as you go, requires effective testing strategies. To this end, Tom Ridge gave a thoughtful talk which focussed on the readability of RSpec code. In Explicit Tests Tell a Better Tale, he challenged us to consider how our choices in our RSpec usage affect our cognitive load.

I could have categorised the talk by Elle Meredith as honest, which undoubtedly it was. However, my first inclination about Elle’s talk entitled Feedback Matters was that it was foremost about being kind. As Elle’s talk emphasised, giving and receiving feedback in the right spirit with careful attention to how it affects people is of utmost importance to software development teams.

Ernie Miller struck a chord with his Humane Development – Empathy talk. I’m looking forward to seeing his slides and watching the video to see what else I can glean from what Ernie had to say. But I do recall that I found myself thinking, how good is it to hear someone talking about empathy in the context of software development!

Adam Cuppy may have posed the question, What If Shakespeare Wrote Ruby? and arguably provoked thoughts about abstract commonalities between Shakespearian and Ruby patterns. However, to me there were overriding factors that lead me to unquestionably consider his talk as kind. For one thing, this professionally trained actor provided the opportunity for the organisers to schedule his talk as the second last in the conference. A masterstroke! Secondly, Adam describes himself as a Master of Smile Generation. I rest my case.

Jeff Casimir opened the conference with a talk that unquestionably fitted the “honest” bill. Sharing his experiences in the context of 10 Years and 10 Mistakes set a nice tone for the conference. I found it to be a refreshing approach. We all learn from our mistakes but it takes a certain degree of intestinal fortitude to get up on stage and honestly talk about all the ways you have goofed up.

Debugging Diversity, presented by Dan Draper and Catherine Jones was without a doubt an honest appraisal of the challenges that face the Australian tech community with respect to increasing the opportunities for people who don’t fall into the “white male” stereotype that is predominant.

Given the seriousness of the diversity challenge in tech, it was pleasing to also listen to Jess Rudder give her perspective on the topic. Her presentation, Diversity in Tech – It’s About More than Just the Hiring Process, hit home, focussing on a critically important aspect. The fact that so many women choose to leave the IT industry points to a problem that the community needs to address.

We were privileged to hear Senator Scott Ludlam present the closing keynote of the conference. Honesty is a word that leaps out when I reflect on Scott’s talk, How the government broke the internet. The importance of an honest approach to the Internet and democracy, that is. As Scott illustrated, we certainly cannot assume government honesty when it comes to privacy for individuals and transparency of governments.

I guess it’s fair to say that Paulo Perrotta presented about “details”. After all, his talk delved into Refinements, a Ruby 2 feature. However, when you consider that Paulo’s talk was entitled Refinements – the Worst Feature You Ever Loved, you get an idea that this Italian has a devious sense of humour. And so it proved. To me, this was a great example of the importance of presenting a technical talk as an entertaining story.

When I reflected on what André Arko had to say, I admit that I hesitated about where to place his talk, or talks. His official talk was entitled Security Is Hard, But We Can’t Go Shopping, in which he shared with the audience the importance of handling security vulnerabilities. I guess it’s fair to say that’s an explanation of details. However, that wasn’t the end of his message. André went on to talk about Ruby Together, which to me sits squarely in the honesty category.

Of course, the talks were only part of the conference. I love the way RubyConf AU has evolved to feature plenty of social activities. My impression is that our international guests particularly appreciate these, especially those on the Saturday morning. Kudos to the conference organisers, Jo Cranford, Rob Jacoby and Trish Jacoby, together with the volunteers for their thoughtfulness and kindness. 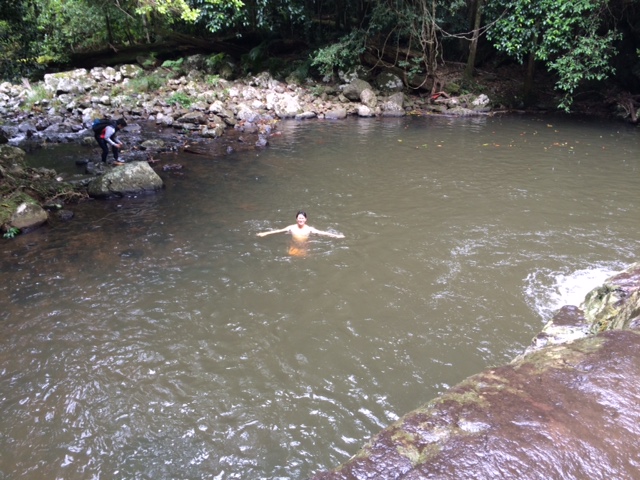 Richie Khoo, one of the Ruby Australia founders, enjoys a refreshing swim in Springbrook National Park

I think my selection of talks bears out my contention that the success of Ruby Conf AU 2016 coincides with the fact that many of the talks fitted in with Kent’s idea that a good conference focusses on small increments, kindness and honesty.