Phew! I’ve just about recovered from Rails Camp 9, an event that may be described as an unconference. It took place over the June long weekend at Lake Ainsworth near Byron Bay on the NSW far north coast.

For this camp, it was my honour to be one of the organisers. Fortunately, Rails Camp now has a well-established pattern and there were many organisers of previous camps willing to help and advise. And I had a terrific team amongst whom to share the workload.

Nevertheless, for the benefit of future Rails Camp organisers, I thought I’d share a few recollections of how our team went about organising Rails Camp 9.

I present the wonderful bunch of Rails hackers who all played their part in ensuring that Rails Camp 9 was, to use an over-used adjective du jour, awesome: Jason Crane, Scott Harvey, Zubin Henner, Ben Hoskings, Tim McEwan, Elle Meredith, Keith Pitty and Jason Stirk. (Trivia note: half of this crew were at the inaugural Rails Camp at Somersby in 2007.)

How did we choose the venue? Once we had settled on the idea of holding Rails Camp in the Byron Bay area, the locals in the organising crew – Zubin Henner, Elle Meredith and Jason Stirk – scoured the region looking for a suitable venue and came up with only one that could accommodate the numbers we were expecting.

In many respects Lake Ainsworth was a perfect venue. Nestled between the lake and the beach it had excellent facilities for our needs. The staff were very helpful and I can really only think of two negatives: we were obliged to deal with some unexpected government bureaucracy and we had to hold the camp on a long weekend.

How we organised Rails Camp 9

Settling on the venue was half the battle. Happily, as this photo shows, we were also able to organise the essential ingredients of Rails Camp. 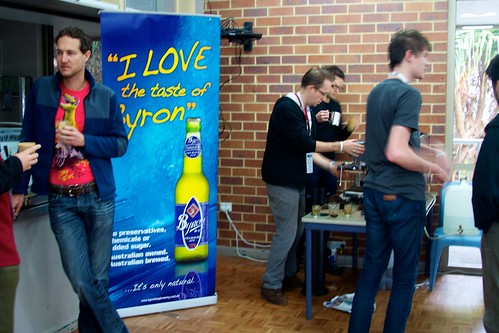 Speaking of essential ingredients, securing the services of Ben Hoskings to again set up the server and wifi was wonderful. Apart from one brief power outage during the weekend, everything ran as smooth as clockwork. So coffee, beer and wifi were sorted, ensuring happy campers!

Some of the other things we did to keep the organisation on track leading up to the weekend were:

One of the wonderful things about an unconference such as Rails Camp is that, once it starts, it is largely self-organising. The 146 participants of Rails Camp 9 decided how they would spend the weekend. Many chose projects to work on and talks to either present or listen to. Some simply appreciated the opportunity to socialise amongst like-minded people. And, of course, there were games of Werewolf to be played. 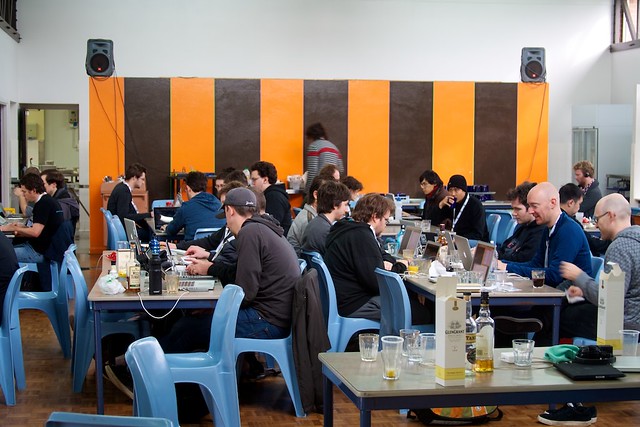 As an organiser, once the camp had started, I found my role was largely to be alert to the possibility of requests for assistance. Whilst this did keep me reasonably busy I did have the chance to catch up with and meet lots of Ruby people from around Austalia and New Zealand. I also managed, thanks to Phil Oye, to remember how to use Bananajour so that I could submit a couple of patches to Ideagora. And, there was one particularly epic game of Werewolf (thanks Carl) to remember.

Thanks to our Sponsors

A wrap of Rails Camp 9 would not be complete without thanking our sponsors. So, on behalf of the organising crew, I extend a big thank you to:

Another heartening thing about the Australian Rails Camp community is that by the end of one camp a volunteer invariably steps up to take responsibility for organising the next camp. Happily, Sebastian von Conrad did just that at Lake Ainsworth, agreeing to take possession of the virtual baton to ensure that Rails Camp 10 happens near Adelaide.

Not only that, there have already been discussions about the possibility of Rails Camp 11 in Queensland and Rails Camp 12 in Tasmania!